News / Profiling in the land of the rising sun
All news

Profiling in the land of the rising sun

There are several large woodworking enterprises in Japan, but the new Cypress Sunadaya sawmill stands out significantly from them. Unlike its compatriots, when choosing the technology for future production, the company decided to abandon the use of typical band saw equipment for the country and relied on a combination of well-known milling and profiling technologies in Europe,which eventually allowed it to achieve record production. In the field of deep processing of wood, the company also managed to take a leading position.

Full text of the article (in Russian) 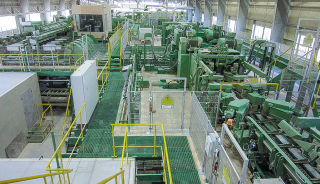 ALSO SELECTED FOR YOU

Business Special Technique launched a new harvester based on the Japanese Sumitomo SH220LC excavator with a Waratah H480C harvester head on a bucket beam on August 10, 2022.

Another harvester construction project based on a Volvo excavator with a Waratah H480C head. The machine has a full set of forest protection and additional equipment, such as spacers for boom lifting ...

Technologies in Siberia: a powerful update!

In the first half of 2021, Avtomatika-Vektor completed work on the project to modernize the sawmill line of the branch of LLC Ilim Timber in Ust-Ilimsk, Irkutsk Region. In the course of the modernizat...
All news
SAVE THE DATE
EVENTS OF THE BRANCH